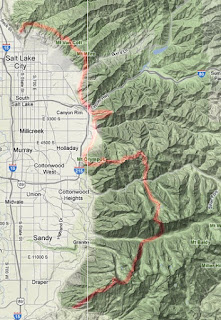 A few months ago, while driving on I-15, Andy looked east at the skyline and suggested we traverse everything. At first I thought it was a horrible idea.  Five minutes later I was in.  We chatted about Noah Howell's Perverse Traverse and how he made it to Mt. Olympus in 20 hours.  If we cut out a little of the bushwhacking he did we thought maybe we could keep the traverse rolling through the north half of the skyline.  Just about everyday since that drive Andy and I discussed how to make it happen.  We figured this would be a fall type of mission but once we realized we both had a full 2 days off this past weekend we decided to give it a go.

A 2AM wake had me at Andy's house at 2:30.  We drove down to Corner Canyon and got a dark, cold 3:30 start.  Lone was easier then it has ever been.  We leisurely made it up in 2:30. Towards the top the trees were frosted, the streams were frozen, clouds were swirling and the sun was just starting to light everything up.  It was by far the prettiest morning I've seen in Utah.
From the summit of Lone, travel was easy and we traversed to the south, headed up the east side of Bighorn, down the west side and over to thunder ridge.
Once on top of North Thunder we were faced with one of the bigger unknowns of the day.  We didn't want to head out Coalpit and Hogum Fork has a reputation for being a heinous bushwhack, both sounded bad.  In the end, we decided on Hogum.  Although there is no trail, staying on the far west side of the gully allowed us to move relatively quickly.  We hit the LCC road in 7 hours.  There we filled up our food and water at a stash Andy left the day before and started walking up towards Tanners.
Going up Tanners was relatively easy. We lugged crampons the whole way so we decided to pull them out for the upper choke.  From there we were tempted to head east and tag Dromendary but decided we better just keep moving.  O'Sullivan and Twins were easy although the terrain had us moving a little slower than we would have liked.
We glissaded down Broad Fork and made it to our second food cache at the S Curve in a little less than 12 hours.  Filling up with gel, chips, V8, gatorade and fruit snacks had us both feeling pretty good.  We made quick work of the mellow Mill B North trail and were surprised with how easy the majority of Wildcat Ridge is.  Most of it was wide open very runnable terrain.  It stayed that way until we made it to Triangle Peak where our fast travel ended.  There was what seemed like a mile of knife edge ridge line that had us double checking foot and hand holds to avoid a likely deadly fall.  We hurried as much as we felt safe doing and were able to get off the ridge and onto the summit of Olympus as the sun set.
The original plan was to traverse the Olympus ridge and head down the West Slabs rappel route.  We scouted it out the other day and, at the time, felt like down climbing won't be too hard.  Now we were 18 hours in, it was dark and I just didn't feel good about it.  Andy agreed and we went down the standard descent instead.

On the way down Travis met us and jogged over to Grandeur.  We were planning on a self supported run with caches along the way.  Once off Olympus we were feeling pretty blown and since we were running by gas stations we figured we'd make it a "pseudo self supported" run and gorge ourselves on store food.  Only problem was the stores were all closed.  Once we had the idea of real food in our minds it was hard to get it out so in a moment of weakness we called Nick and he showed up with 9 double cheeseburgers, 3 large fries and some big drinks.  It was DELICIOUS!

We ate, ran over to Grandeur and started up.  This is where I began to question my ability to finish.  It was dark and I felt like I could barely crawl up hill.  Having Travis there forcing us to talk about movies and other nonsense which allowed me to take my mind off the numbing work of hiking.  On the way down the burgers must have kicked in and I started to feel alive again.

Once down we had to make some decisions.  It was 4:30AM and I had to be at work at 9PM. We both felt pretty tired but were ready to keep going.  We added up our speculated times and figured if we hit H Rock and finished then we'd be done sometime in the late evening.  Going into a 14 hour overnight shift on no sleep after what would have been 30 something hours of movement just seemed irresponsible.  Although H Rock certainly deserves to be in the Skyline we made the hard choice to skip it, run to Mt. Wire and then finish from there.  Next time...

Going up Wire we were reenergized.  I think it was because we just ate again, the sun was coming up and more importantly we fet like we were close.  A 43 min ascent of Wire had us running down to Red Butte and back up Van Cott, psyched that we felt so good.
Gear:
Dynafit Ridge L/S Tee
Dynafit React Dry Short Tights
Dynafit X4 Dy. N. A. Pack
Dynafit Movement Powerstretch Pants
Outdoor Reasearch Helium Jacket
Outdoor Reaseach Storm Tracker gloves
Black Diamond Z poles
Camp XLC 490 crampons
Camp Corsa Ice Axe (sawed off)