Having skied a fair amount in both the SCARPA Alien 1.0 and the Dynafit EVO and having been asked by enough people which is better,  I feel a brief review might be useful.  To start, both boots are amazing.  The walk mode on both is light years ahead of the Dynafit TLT5.  Given that the TLT revolutionized the uphill game, this means something. They both almost feel like a running shoe.  The Elk Mountain Grand Traverse champions from last year actually ran about 10K in the Aliens and say they are running shoes.  I spent the last half of the 2012 season in the EVO and absolutely loved them and have half of this season in the Alien 1.0 and feel the same. So which is better?  Here's a brief side by side (all numbers are from a size 27.0).
Weight
Alien 1.0 shell:  610g  Liner: 111g   Total:  721g/boot  (1.58lbs)
EVO  shell:  566g  Liner:  124g  Total:  690g/boot  (1.52lbs) 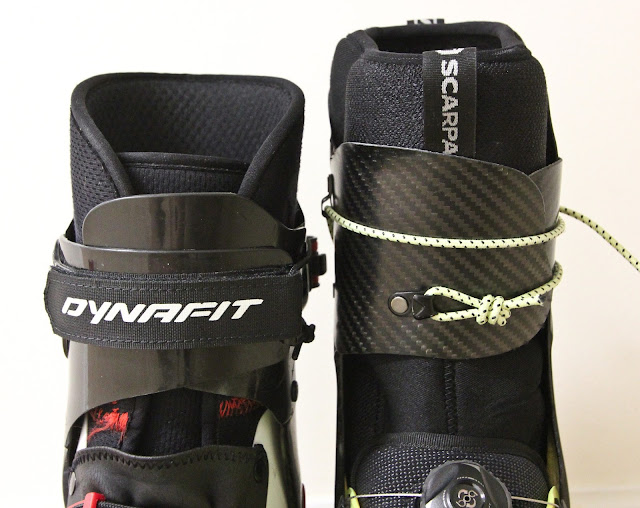 Upper Buckle
Vertical throw vs horizontal throw.  Both work, some say the Dynafit is more reliable, other say the vertical Alien throw is faster.  I think they're both reliable and both fast.  It's really whatever you're used to.  Cutting a hole in a pair up pants is a bit easier for the Alien though. 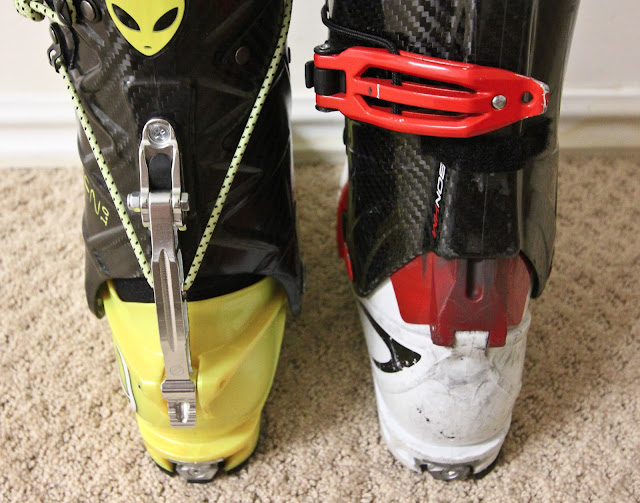 Lower Buckle
I suppose the BOA gives you a more uniform fit but nothing too superior over the standard buckle on the EVO.  The EVO buckle is much improved over the TLT buckle and actually works.  I also like the mini gator that the EVO comes with. It certainly keeps more snow out of the boot than the BOA. 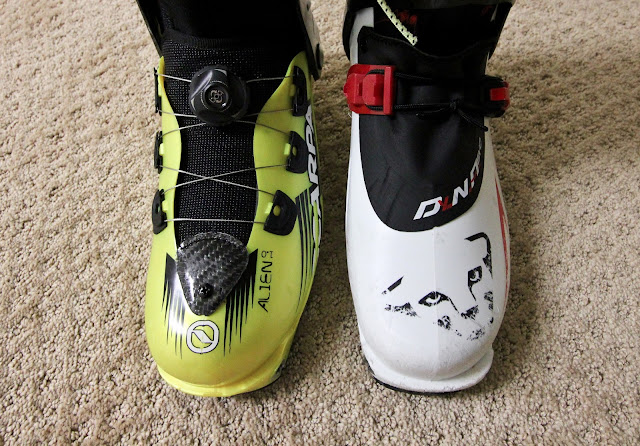 Durability
This is a hard question to answer after one season.  I skied the EVO pretty hard including a fairly long boulder hop down the Nisqually river bed.  This same scramble absolutely destroyed Andy's Stratos (mulitple quarter sized holes in the shell) but the Evo held strong - very impressive.  I haven't abused the Alien in the same way but will soon and will post an update.  Looking at/fondling the Alien the main difference I notice is the cuff pivot.  Why can't Dynafit put metal on metal pivot points on their carbon cuff?  Rumor has it they screwed this up again on the TLT 6. With that said, after a season in the EVO there isn't much wear on the carbon but with my prior TLT experience I fear it's coming.
Forward Lean
Who cares?  I don't really.  I hear the 2013 Evo has an adjustable forward lean but can't find what the range is.  The 2012 model has a fixed lean of 15 degrees. The Alien has two settings either 13 or 18 degrees.
Price
They're both expensive.  Check out skimo.com for current pricing.  Luckily both the Evo and the Alien 1.0 have cheaper versions - the Dynafit PDG (great reviews by A. O'keefe and Layne Caldwell) and the SCARPA Alien (not the 1.0).  From what I can tell they are both very similar to their expensive big brothers but just a little heavier and not quite as stiff.

Overall
I would give the nod to the Alien 1.0.  I think the skiablity gained with a little higher cuff more than makes up for the open front, especially since the snow problem is easily solved with a gaitor or stirrups on your pants.  As an added bonus (although unproven) I suspect the cuff/pivot point wil hold up on the Alien a bit better.  Anyway, both are great and everyone should have a pair of super light weight boots.  Once you try them on you'll never go back to the clunky bricks you've been lugging around.