We decided to give Dead Dog another go since our first attempt luckily didn't end in tragedy, but nonetheless left us with "much to be desired". So we met at 5 am at the Morrison park n' ride and arrived at the trailhead a little after 6 am. It seemed that we were actually going to get a really good early start and possibly beat the  forecasted late morning storm clouds and possibly ski under blue skies the entire time! That was before we met this guy: 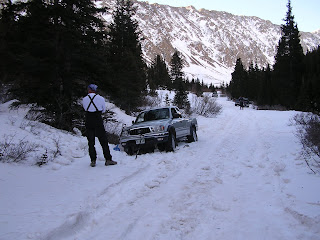 He actually helped pull us out when we got a little stuck near the trailhead, but unfortunately he then proceeded to get his truck completely stuck and we tried/felt obligated to repay the favor. After about 45 minutes of trying our good will ran out. It was a little past 7 am and we finally were leaving the trailhead 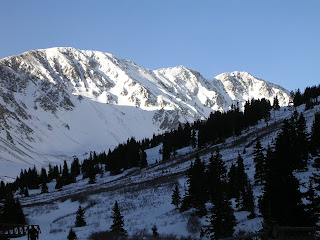 Jeff crossing the bridge at the "official" trailhead 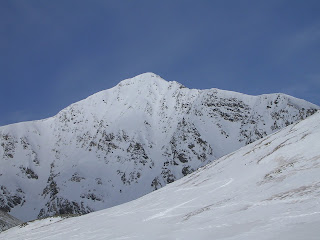 Here is a pic of Dead Dog from the approach with beautiful blue skies.
We arrived at the base of the couloir about 1:30 hr after leaving the trailhead, luckily some "climbers" already had put in a booter ahead of us so all we had to do was walk up. 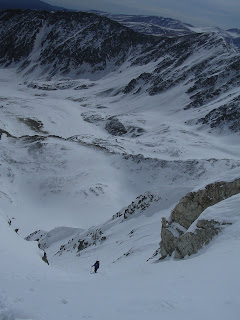 Booting up the couloir approaching the top ridge. 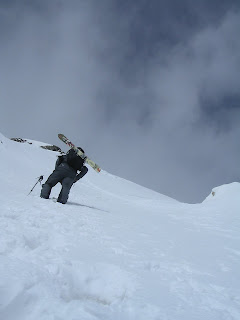 So I was feeling pretty good and Jeff was a good sport and didn't mind if I went ahead to the top. So I followed this guy to the top ( I think his name is Mike). We got to the top and it was windy and cold so there was only one thing to do...no not dig a deep hole and jump in to get out of the wind (JD), but ski down. 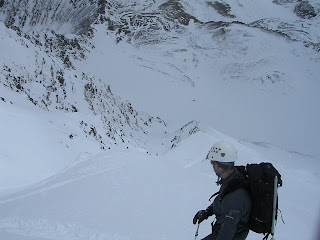 This is (Mike) a couple hundred feet from the top looking into the top of the couloir. He was about to drop into the couloir, which he did ,right after I snuck in front of him and stole "first tracks"... yes that is "how I roll".
I met back up with Jeff and followed him back to the top again. 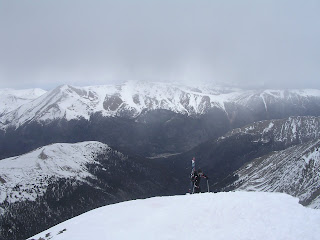 Here is Jeff about 20 steps from the top. 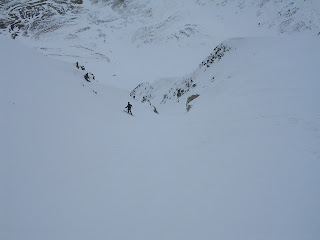 Jeff skiing on the descent.
We made it back to the trailhead at 12:30 and somehow the guy with the truck stuck in the ditch was stuck again in another ditch on the other side of the road! So we did what felt "right" at the time, which was to pass him and try not to make eye contact!
Posted by Jason at 9:35 PM