We've been talking about this tour for a little while.  See Andy for more.  Last attempt ended with a broken binding on top of the Pfeif.  6:00AM start put us on the ridge above Maybird as the sun came up.
We were expecting warm weather.   Not sure what the temp was but wind made it COLD!

#1-NW couloir off the Pfeifferhorn.  Little icy but it skied pretty well.

Andy and I hadn't thought much about Snapdragon but Jared was psyched so we followed him.  Turns out we didn't have any idea where it was.  We ended up taking the line in the left of following pic.

Next up, #3-Montgomery. To enter, our options were a sketchy down-climb or a rap.
Stayed on rappel over the sugar covered rocks in the top of the chute.


The skiing was great.  We couldn't find the anchor before the cliff so we left more stuff, oh well.

From there #4-The Sliver waited.

Next #5-Dresden Face. We weren't sure if we had time.  Glad Jared was psyched once again.
#6-The Needle skied pretty bad.  Mostly icy with patches of soft.

Back up to the top of the Coalpit headwall.

#7-Coalpit, best skiing of the day.
#8-The Y was a short traverse away.  The top was great.  The bottom, full of debris. 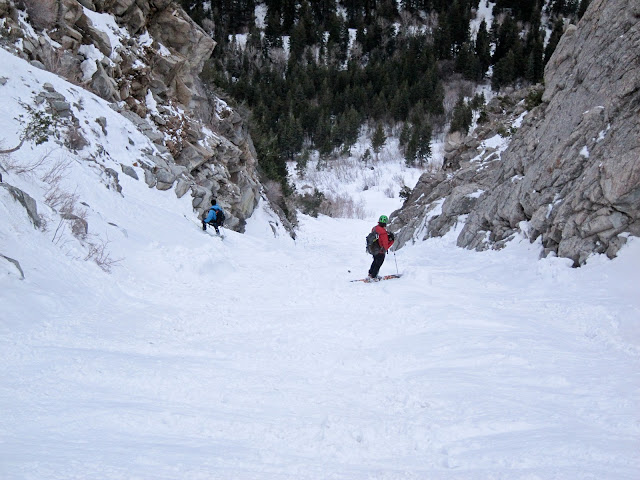