I gave Drake a call a few weeks ago on the off chance that he would have a week free to go climb.  He said he had class/work on the 8th and then a final in the morning of  the 15th but as long as we could get him back to Denver in time to take his test he would go.  Ha ha, I love it.  He was so psyched that he was willing to risk missing a final in Pediatric Nursing to give the Nose a go. He and Graham (Indiana friend who wanted to go find a partner in the Valley and get on whatever he could, also psyched!) pulled into SLC late Wed night slept for a few hours and we headed out early Thurs with the plan packing the bag that night, fixing to Sickle ledge on Fri, and giving it a go starting Sat. I was sure Drake was in great climbing shape but was a little worried about how well we would work together never having climbed a wall together.  In fact, we had only climbed together once (outside of Climb Time Towers) prior to this trip.
Fixing to Sickle went as smoothly as I could have hoped and I remembered why I liked climbing with Drake so much last year; he's always ready and trying to be efficient.  Exactly what we needed on a long climb.  From there it was pretty casual making our pre-planned bivy spots.  On the first full day of climbing we hit El Cap Tower before 5 PM.  Having of extra free time was pretty great, we ate a ton and then decided to fix the next pitch, the Texas Flake, just to get a head start on the next day.

Day 2 was better than the first.  There was a little to think about (always fun) as far as logistics go. The King Swing, hauling through the traversing Grey Bands pitches, and Drake leading his first full aid pitch of the trip (The Great Roof) were the highlights.  As lame as it sounds, it felt pretty good to hit the King Swing and hear cheers from the bridge down low.

Finding the East Ledge decent added a little adventure to the day.  Luckily it was easy to find, had fixed lines and was a MUCH quicker than the Yosemite falls exit. 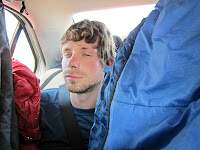 Immediately after getting down we took showers and headed out as quickly as possible.  We figured if we drove all night, Drake could get home to study a bit and sleep the night before his test.  It felt like a long drive to SLC, I'm sure adding the 7 hours to Denver felt longer. Hope he did fine.  After unpacking I realized we left in such a hurry that we forgot to take one of the lines we left at the base of the route.  Hopefully the party that we shared fixed lines with noticed we forgot it and gets some good use out of it, I doubt they will... 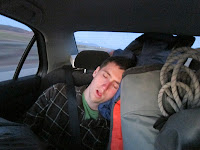 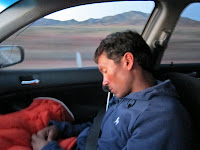