Teewinot - Worst snow of the year 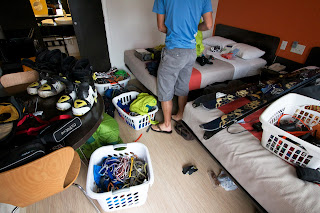 Andy and I both have the week off so we headed up to Jackson with big plans.  On Monday afternoon we pulled into the ever classy (seriously, it's pretty nice) Motel 6 with laundry baskets full of climbing gear, ropes, skis and started packing.  A 2AM wake up found us at the Bradley Tagert trailhead on Nate Brown's bikes(thanks!), with huge packs, starting to ride over to Lupine meadows just after 3.  The plan was to start on the summer trail until the junction and then head into Glacier Gulch.  We've both been on that trail many times but for some reason we found ourselves lost 15 mins in.  An hour later, after mashing through isothermic snow,  we saw faint remnants of a trail and thought we were back on track.  Turns out we made a full circle without realizing it and were stumbling across our own tracks from earlier in the morning.  Good thing we woke up early...

We fought conditions for the next few thousand feet up to Delta Lake.  It was nothing but slop.  I had thoughts of pulling the plug but we figured it would get a little firmer up high. Unfortunately, we continued to have bluebird skies instead of the showers and thunderstorms which were 80% likely.  The sun was not going to do good things to our already soft snow. At least we hit Glacier Gulch in time for a little golden hour,  amazing.

Trail breaking continued to be problematic all the way up the Southwest couloir where snow consisted of a thin breakable crust on top of more mushy snow.  We fought this up to the notch.  A short down climb and traverse over the East Face and we were on the summit, riding it like a horse.  Pretty sure Andy even spanked it (the summit).


Skies were still blue and it was HOT.  Anything the sun had touched was mush.  Traversing back on top of the East Face it was very clear we needed to get off the mountain, everything was starting to fall down.  We skied what was probably the worst snow of the year while bailing on our big plans.


Even though we came up well short of what we had hoped for and the skiing was horrible, it was still a great day.  The location in Glacier Gulch may be the best in the Park.  Weather looks like it'll stay hot or stormy for the next few days so the tentative plan is to go back on Monday and give it another go!
Posted by Jason at 5:33 PM