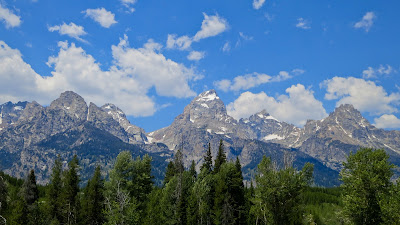 Chris Cawley and I both had Thursday off so we decided to head up to Jackson for a quick go at the Grand.  Chris got off work Wednesday evening and we had hoped to head up to the best Motel 6 in the country.  Unfortunately this fell through (expensive in the summer!).  Lucky for us, Nate F. Brown was kind enough to let us intrude on him and his family.
A full 8 hours of sleep and we were out the door by 7:30.  One benefit of jogging the majority of the way is the "lazy alpine start."  Another is the lack of gear needed for a short outing. We left the trailhead with a liter and a half of drink, a hand full of gels and a light wind breaker.  The plan was to keep it conversational, take a few pictures, and enjoy running in the mountains.  Apart from a few moments of heavy mouth breathing, I think this was achieved.


We hit the Lower Saddle at 1:48 and kept moving at a relaxed pace.  I'm still not sure of the fastest way to the Upper Saddle but we found a pretty good line that avoided most of the loose trail.  From the Upper Saddle we followed the traditional OS route (Belly Roll to Double Chimney to Cat Walk and up Sargent's Chimney) and topped out in 2:49.

We spent 10 or so minutes on the summit enjoying the warm weather and light breeze and then were off jogging back down.  Down climbing the OS felt easier than climbing.  Reversing the Double Chimney move consisted of grabbing the jug from between your feet and lowering out. There's also a nice flat landing which makes it feel pretty safe.
There's still a bit of snow coming off the Lower Saddle which was steep and firm enough to keep us from a standing glissade. We both thought we may have tore something after the sit glissade but were happy to find no blood in the snow.  Running shorts/half tights don't make the best sleds.   From there it was a quick exit running down hill for the last few miles.  We hit the car in just over 4:40.  Plenty of time to jump in the river and drive back home in time for dinner.
Gear: