I had all of Thursday off so I figured I better try to do something that would make me uncomfortable.  Mission accomplished.

While chatting with one of my coworkers last week she mentioned that she ran Kings Peak on her day off.  She said it was beautiful and highly recommended.  Since I had never been and it fit my idea of a long day, I went.  I wanted to run hard and had a few goal splits going in.  1:30 for the first 10 miles, under 2:30 to the summit, and 4:30 round trip.  I knew this would be a little fast but decided to try anyway.

I made decent time to Gunsight pass 1:40.  From there I intended to head directly to Anderson Pass via a boulder hopping short cut.  I heard this trail breaks off to the hikers right about 600 meters past Gunsight, so that's what I did.  By the time I had run downhill for 5-10 mins I realized I was not on the shortcut, instead, I was on a connector that met up with the standard trail leading into Painter Basin.  The shorter trail breaks off to the right about 20 feet after you crest the pass, not 600m.  Now I know. The longer way added about a mile and was the start of hard afternoon. 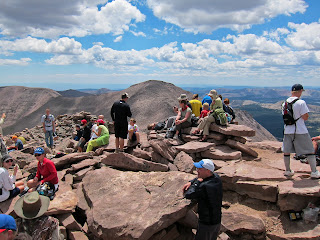 Once I realized I missed the shortcut the psych for running hard was lost.  At that point I was over being in the Unitas and just wanted to get back to SLC so it turned into a "I just better keep moving type of attitude" instead of wanting to go hard.  This was not very fun.  Turns out a good attitude goes a long way.  On the summit ridge I was sick of running and asked some boy scouts if I was getting close.  They said, "Um, no man, there are like three more fake summits.  You've got a ways to go." Humiliating. I topped out at 2:45 and turned around without chatting too much to any of the 20 people who were hanging out.
The rest of the way went as expected (minus the superman fall onto my face).  There was loose footing until Gunsight pass and then a great gradual down the rest of the way out of Henry's Fork. I was 5:05 at the car and tired.  Not quite what I had planned but a good day nonetheless.  I drank a sip of water, stretched for a few minutes and was back in the car.  The best moment of the day was pulling into the driveway 10 hours and 15 mins after I left.  Plenty of time for a swim, dinner and a full nights rest.