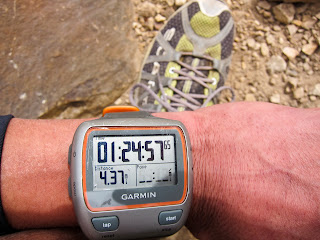 The easiest way to "claim" an FKT is to head to a peak that has no KT's.  East Twin (11,330') just happend to be one of those peaks.  I did hear a rumor that a speedy CO guy ran up there for an easy run, took a few wrong turns and then went 1:32 to the summit so I guess there was a known time just no known time from a "hard effort." Still feeling a little flat from Lone I was pleased with the day.  32 mins to the lake, 1:15 to the saddle, 1:24:57 to the East Summit.  It will go much faster.
It was a little breezy on top so I pulled a jacket from my bag and also, without knowing, threw my car key on the ground.  From there it was a casual jog back to the parking lot.  On the way out I ran into Adam who was willing to keep me company so we both headed down.  Once at my locked car I realized my mistake.  Luckily, Adam was there to taxi me around for the next hour or so.  After sorting out my mess Adam said, "you know you have to go back up there one day and find you key, right?"  I told him I'd go but it wouldn't be anytime soon...
Later that day Jared called and said he had been thinking about a scramble from Little up to Twins via a long low angle slab of granite that headed all the way from the road to the ridge.  He promised a guided trip up a "granite half pipe." Although I hadn't been too psyched to repeat a Broad's Fork ascent, this would be different. How could I say no?
As I pulled off the freeway Friday morning at 6:30 it was still dark and it was raining.  I thought we had no chance of success without a miserable morning; all I wanted to do was go home.  Faced with a likely cold wet morning, all we could say was, "might as well go check it out."  After driving up the canyon the rain stopped so we kept "checking it out." A short, dark, hateful bushwhack had us standing on solid rock feeling pretty good.  The slab proved to be quick and easy and it led to a ridge which was a perfect combination of grassy patches and rocky scrambling all the way to the summit of West Twin.  To make the morning even better, while Jared was instagramming on the summit, it started snowing (way better than rain!) and, after a solid 5 seconds of looking I found my lost car key, right where I left it. From there we had a leisurely run out Broad's Fork and were home intime for lunch, a nap, and a little work.  As usual, "checking it out" was a lot better than going back to bed.