There are a lot of reasons to randonee (skimo) race.  Coming from an athletics background I certainly enjoy the competition aspect of the sport.  There's something satisfying about going as hard as you can and either finishing ahead of someone or getting beat and knowing there was nothing else you could have done.  The camaraderie aspect of the sport is also quite enjoyable.  Our little Citizen's Series here in the Wasatch is a good example of that.  It's pretty cool to get 100 like minded people together on a random Tuesday and all cheer each other on as we run around in the dark.  There's also the whole skill and technique aspect of the sport and I think everyone would agree that there's something gratifying about seeing progress.  The sport on it's own would be enough to get me excited but there's more.  For me, the main reason to race is the opportunity it provides to learn how to move more efficiently in the mountains.   Using race gear alone opens up the limit of what is possible in a given amount of time. Add on a little skinning/kick turn technique and some fitness and it seems that the potential is limitless.

Yesterday Tom and I both had time so we decided to head down to Timpanogos and see how much we could get done.  We debated what to ski but decided we'd park at my parents house in Pleasant Grove and head up the Cresent (Front Porch) couloir and then over to Cold Fusion.  From there the plan was to head north until we ran out of steam.  We started a little later than we should have and once we were on the N summit it was pushing 8AM.  We looked north and all we saw was dirt and roads.  We also noticed there was no cornice guarding the Grunge.  Seeing the Grunge in the morning light and not wanting to walk on road for the next forever we decided to move to plan B - ski from the North, South and Main summits of Timp.  We figured we could ski the Grunge down to Woolly Hole, climb to Pika Cirque, traverse over to Emerald Lake and up to the South Summit, ski the East ridge, walk back to Aspen Grove, head up Primrose Cirque to the Main Summit and then ski the West face back to the car.
Once we traversed to the top of the Grunge we almost bailed on plan B before it started.  From the anchor it was clear there was no cornice just off to the left.  Even knowing this it was a little unnerving walking to the edge since I couldn't see the slope below until I was basically on it.   We talked about skiing it, decided that it looked soft and that we'd give it a go.  I got my skis on first so figured I go test it out.  I sat on the edge and lowered myself down and very quickly talked myself out of it.  The snow that we thought was soft was actually quite firm and our little race skis are so skinny that the steepness of the slope would hit my boot edge (which sticks out over the edge of the ski) before it would engage the ski edge.  Once I bailed on the idea Tom decided to try.  Same result.  Although it is skiable we decided to down boot the top 20 feet.  Shameful I know, but once we were done down booting, it was clear we made the right call.  Teague would have skied it.  After we got through the crazy steep part we put skis on and had an enjoyable soft descent.
After we exited the Grunge we skied over to the south end of Woolly Hole and headed up one of the mellow chutes to Pika Cirque.  From there we headed for the low point on the south rim of Pika Cirque and traversed through Timpanogos Basin to Emerald Lake. The skinning was relatively fast and luckily we were able to keep skis on for the majority of the way. 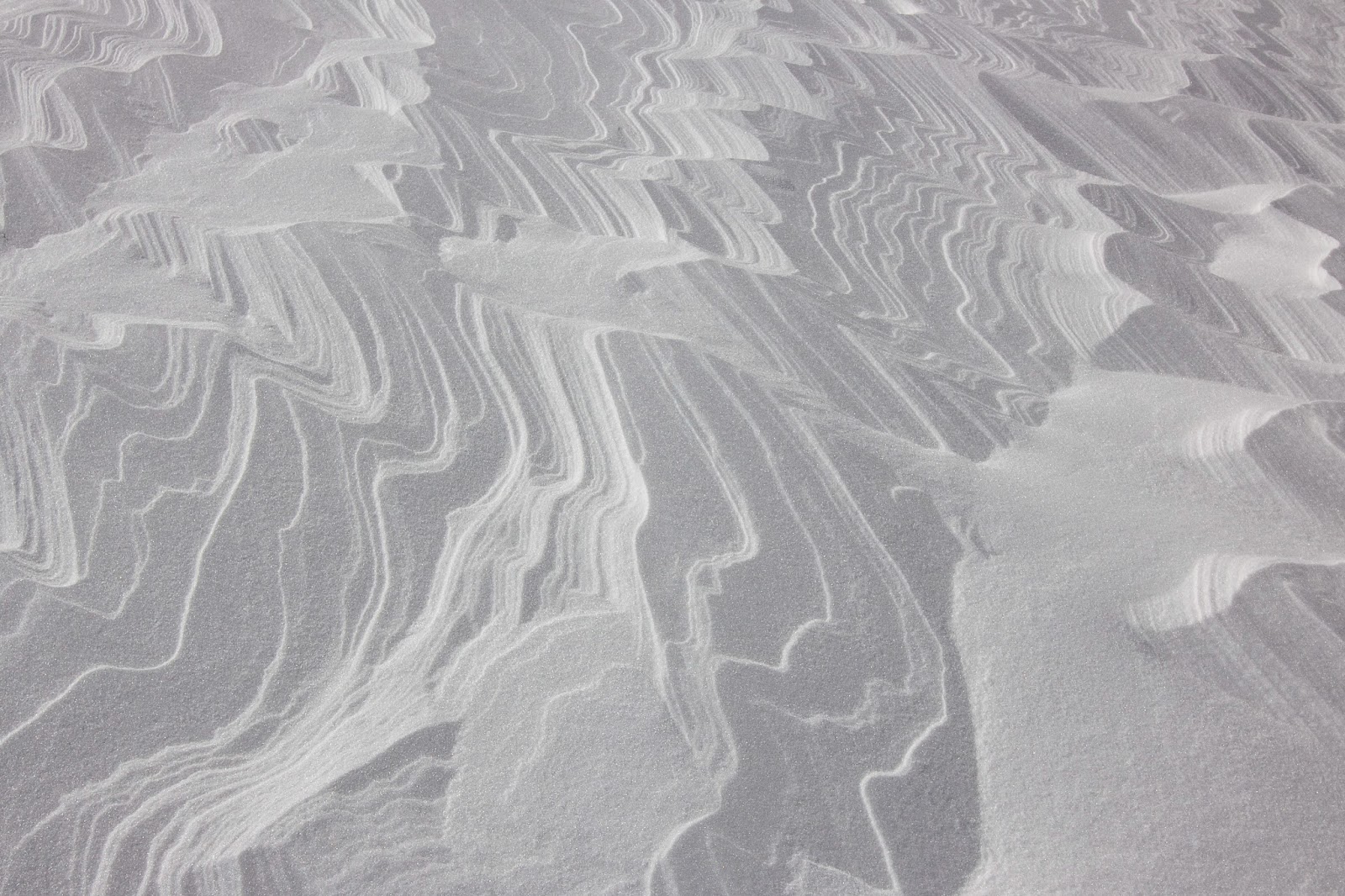 The skinning stayed firm as we headed up the snowfield and before we knew it we were 10,000 feet into the day and feeling pretty good.  The west faces were a little bony but there was enough snow that we could leave skis on to the South Summit.  From there it's a quick traverse to the East Ridge.  It was now around 11 and conditions was almost perfect, maybe a touch soft but the whole E. Ridge skied fantastically.
Luckily there was old wet debris to the north of Stewart Falls which provided a nice slushy path all the way to Sundance.  Once we were there we figured all we needed to do was head up to Aspen Grove and then we'd be able to climb up and over and exit right back to the car.  Only problem was that Aspen Grove was 3 miles away.  We thought about hitching a ride but figured we'd keep it pure and just walk.  45 mins later we were back on skis happy to not have cheated.  Primrose skinned pretty well and although we were feeling a little blown we just kept the pace steady.
Once we hit the saddle we donned ski crampons and worked our way to the Main Summit.  A quick photo and were we off expecting to find perfect corn.  At first we were a little disappointed with the punchy ice but after 500' we found what we were looking for.  We skied corn all the way to the meadows and then skinned up and over to Grove Creek so we could exit down to my parents and get some much needed food/drink. 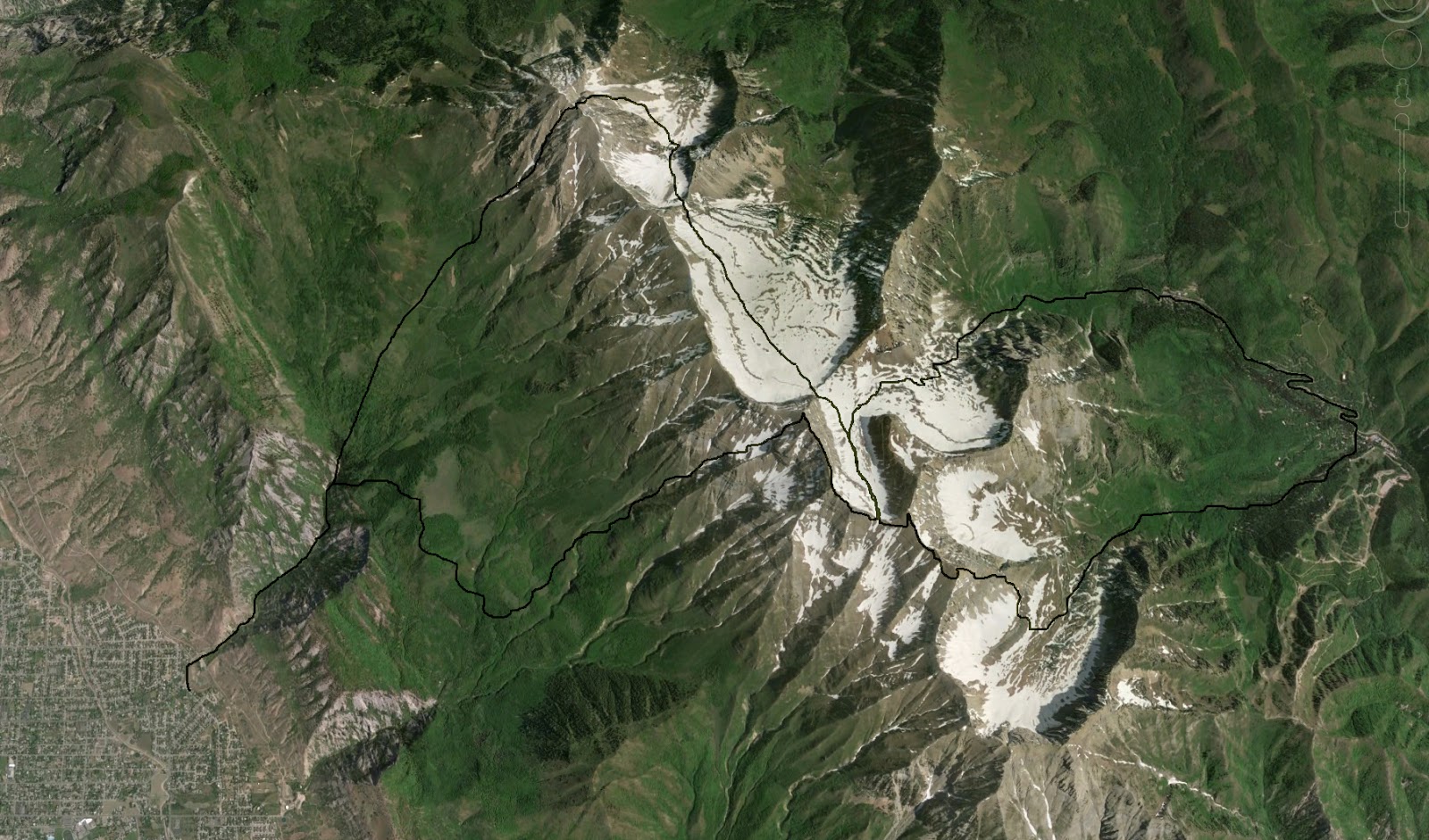 I think my obsession for Timpanogos started back in the early 90's when my dad dragged me up there. I had a bumping headache and I'm sure it took forever but we reached the summit and I was psyched.  I'm not sure this beats that first day but this tour certainly ranks up there as one of my favorite days on Timp. Being able to see the majority of the mountain, not having to car shuttle/bum a ride, and starting/ending in my parents' driveway made it extra memorable.  As far as our gear choice goes I think race gear was the way to go.  It climbed well and the down was still excellent.  Sure, we didn't ski the upper grunge (not sure I would have felt comfortable on heavy stuff).  I know stronger folks could replicate this tour faster and on heavier gear, I'm just not one of them.  In spring conditions like we had it seems that one can get away with some pretty light skis/boots...