For some reason the Uintas have never interested me like they should.  I’ve been up Kings a couple times and although it is beautiful and remote, I kind of felt like I had seen the Uintas and didn’t really need to go back.

For the past year Lars has been psyched on trying to link all of the 13,000’ peaks in Utah (they all happen to be in the Uintas) in a push.  The idea was stolen from CraigLloyd who had attempted a couple times in the past but for various reasons was unable to complete the link.  I fought Lars on this idea for a while thinking the Uintas just weren’t that cool, but being the persistent Viking he is, he got me to make an attempt with him.  Logistics were somewhat complex and there really isn’t an easy way to receive support so Lars and I decided to carry everything we’d need.  That turns into a lot junk when you’re planning on being out and moving for 30-40 hours.

We both had a couple days off in August and spent the proceeding weeks preparing.  When our time off finally arrived it looked like weather was rolling in.  Still thinking we could squeeze it in we decided to start a day early immediately after work.  This had us starting up the first peak, Tokkewanna, at 5 PM. Not ideal but neither was a full day of rain/thunderstorms. We summited Tokkewanna, Wapiti, and Wastach in just over 4 hours and were feeling great.  Ambitiously I thought we had it in the bag but on the way off Wasatch, Lars’s ankle (the one that has kept him from racing for the past year) started to flare up.  It seemed that any off camber scrambling aggravated his injury.  We decided to bail before we really started.

After that attempt I was sold.  Being up high and getting a glimpse of the Uintas without all the boy scouts and horses that crowd Henry’s Fork opened my eyes.  Knowing how bad Lars’s ankle has been all year, it seemed very unlikely that he’d be able to make another attempt any time soon.  I should have waited and probably would have if I were a better friend but I was just too excited to wait. I told Lars I was going to try it with Tom Goth (his account of the day HERE). He said OK but I don’t think he thought I was serious.  I was.  Immediately after I texted Tom a screen shot of the route and asked if he was interested he responded, “When?  I’ll get work off.”

We decided to stick with the plan of starting at the West Fork of Blacks Fork and heading southeast until we finished at Swift Creek. This time we weren’t hurried by rain so we opted for a morning start hoping to only spend one night out.  Tokkewanna to East Lovenia went as smoothly as we could have hoped.  Route finding was a breeze and the travel was relatively easy.  There was the usual loose Uinta boulder hoping but nothing too exposed or steep.

From there we dropped into the Oweep Valley and followed the Highline trail all the way up Porcupine Pass.  From the pass it’s a short boulder hop up Wilson.  This is where progress ground to a halt.  Due to loose footing it took us another 2:30 hours to summit Powell.  We decided to head off Powell into Henry Fork, which also seemed to take forever.  The boulders were exactly the wrong size.  Not quite big enough to hold still and not quite scree.  After getting off Powell we were feeling a little deflated considering we had only hit two summits in the past 8 hours.  This feeling continued as we bushed whacked through the heinous marshland that is Henry’s Fork.  For all we knew there was a clear way through but in the dark we decided to just push on.

Sitting at the base of Gilbert laid on the ground and took a 15 minute nap and then continued the boulder hopping.  I’d read that the summit of Gilbert seemed to always be just out of reach.  I figured whoever said that was just tired and that it wasn’t really too bad.  Maybe I was just tired but after being there it really did drag on forever.

From there we did the straight forward traverse over to Gunsight Peak where the sun started to rise.  At this point I wanted to quit.  The only problem was there really wasn’t an easy way to do so.  It had taken us about 12 hours to hit three summits and we had another 12 to go.  I was worried we weren’t going to summit South Emmons for another 12-15 hours.  With this in mind, knowing we couldn't quit here,  we figured we had to just keep moving and eating. 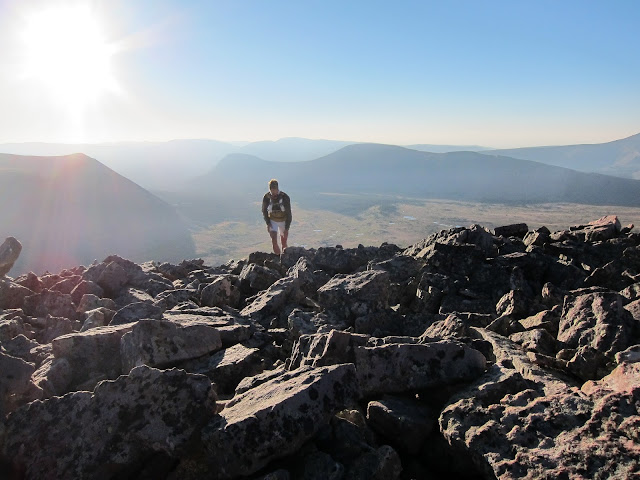 Once off Gunsight the travel stayed a little tedious but the climbs were much smaller and passed much quicker.  We tagged Dome, Fortress and Cliff Point over the next couple hours and after a long slow night it finally felt like we were finally moving.  Tom set a good pace up Kings and 30 minutes after leaving Anderson Pass we were at the high point for the day.


The remainder of the Kings/Emmons Ridge was slow but very straightforward.  There are total of eight summits past Kings all of them with less then 1000’ of prominence.  It took six hours to hit the remaining summits which was much better than the 12-15 I feared.

From South Emmons, the remainder of the day once again ground to a slow walk.  I read there was a trail off the saddle between Emmons and South Emmons down to Swift Creek.  There might be but we did not find it.  This was some of the worst downhill scrambling I have ever done.  It was steep, loose and took us about an hour cover 1500'.

The horribleness didn’t stop there.  I left the map with trail instructions in the car because I figured we’d just use Tom’s watch and phone to navigate.  Unfortunately at this point in the day the watch had died and Tom had crushed his phone.  I did have a map loaded on my phone and had the Gaia app but I hadn’t dropped any waypoints to mark the trail.  Over several hours we wandered through open fields and marshes, bushwhacked through forest, and crossed Swift Creek several times before giving up on finding the trail.  We figured the three remaining miles out would just be slow but if we followed the river we’d make it eventually.  No more than 20 mins after making that depressing decision we happened upon the trail.  Some of the only trail we used the entire day came when we wanted it most.  After a long day the Uintas finally gave us a gift.