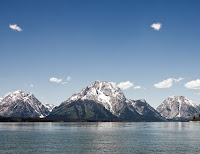 I thought I was done skiing for the year but after chatting with Lars Kjerengtroen, Brian Harder, and Nate Brown, the plan came together to take Nate's boat across Jackson Lake, ski the Skillet, and then wake surf/board our way back.  It sounded too fun to say no.

Packing the boat we could all tell this trip was going to be unusual, skis on the wake board rack, whippets and poles by the surf board, boots next to the wet suit... The walk into Mt. Moran is nice, on a flat well groomed path. But the boat ride across to Moran is amazing!  After spotting a place to unload at the base of the Skillet, we boated to the north side of Moran and scoped a few lines that are now high on the list for next year, fun.
At about 8 PM, just in time for the mosquitos, captain Nate skillfully beached/anchored the boat, we unloaded, caked on bug spray, and started bushwhacking our way up.  The bush whack's not bad, a little thick in spots but pants made it tolerable.  Brian (poor sucker) decided to leave his pants in his pack.  Nothing like an hour and a half of thick brush in short running shorts.
We camped about 1000 feet up from the lake.  A near full moon and still wind made for a great evening.  The next morning was just as good, sunny but not too hot on the up.
About half way up there's a rather large bergschrund opening up and it seems like crossing it will be getting A LOT harder in a few days.  Luckily we could still snake our way through.  Once past the schrund, the snow stayed surprisingly smooth.  There was a pretty deep runnel right down the middle but other than that conditions were pretty good.  Fast, firm summer snow on the way up that softened nicely for the down.
The ski down was much better than expected.  The snow corned up perfectly and stayed pretty clean and free of debris until the very bottom.  4800 feet of continuous snow in the middle of July!
Once down, a quick bushwhack out and we were back on the water.  Nate put on a wake surf clinic.