Two years ago Lars, Andy and I went on what we called a "Volcano Tour."  We all had a week off so we headed to the Pacific Northwest and skied as many volcanoes as we could.  Rainier was certainly one of the highlights of the trip.  That day we got a 3:30AM start and without focusing on speed were able to summit and be back in Paradise by 11:30AM.  Eight hours round trip wasn't blazing fast but we figured we should be able to go closer to four hours round trip given the opportunity to try and race it.

Fast forward two years and Andy and I found ourselves with an unexpected three days off.  The Rainier forecast was less than ideal.  It called for snow and rain likely through Thursday night, with snow and rain and mostly cloudy skies likely on Friday morning.  We figured that, as we say regularly, we might as well go check it out.  As we were leaving SLC I thought we had a 10% chance of success, Andy guessed 5%.  Either way, we weren't too optimistic.


We pulled into Ashford Thursday evening and packed up for the next day.  With the unsettled forecast we discussed hauling up extra safety measures.  We loaded a rope, prussiks, full avy gear, puffy, extra pants, extra gloves, hand warmers, headlamp, ice screw, tibloc, crampons and ski crampons. Not exactly light and fast but not too bad.

After a solid 8 hours of sleep and a fake alpine start (5 AM wake up), we drove up to Paradise in the daylight.  Leaving the Bunkhouse in the light with full intentions of summiting felt a little wrong. But we didn't have permits and had to wait for the ranger station to open at 6AM.  A quick chat with the rangers had us even less optimistic.  They said the snow was slush until 10,000' and that Camp Muir was still in the clouds.  Again, we figured we might as well go take a look.  The whole time we hoped that the clouds would break and we would find a sunny summit.

The way up to Camp Muir was as slushy as expected.  What we didn't expect was the lack of snow.  There were 4-5 rock outcroppings that required a transition from skiing to booting.  We just pulled skies as quickly as possible and kept moving.  On the Muir the incoming skies looked threatening until all of a sudden we could see the outline of the sun through the clouds.  A few minutes later the entire upper mountain appeared.  Feeling pretty good about our summit chances we hit Camp Muir in 1:34.
Moving roped through Ingraham Flats provided a little comfort, especially since the tracks from earlier parties had been obscured a little by melting.  There was a short section of downhill right before gaining the Cleaver.  Turns out skinning downhill roped up is not easy.  The DC was more of the same skis on skis off deal until we got sick of it and started booting.  Back on the Ingraham we were both a little apprehensive about the upcoming ski descent.  The snow was rock hard and lined with ice.  We were expecting a long bumpy ride.  The firm snow did make for good booting though so we kept it going all the way to the Summit Crater.  At some point around 13,000' Andy realized he was still in a short sleeve shirt.  This was definitely not the snow storm we were expecting.

Once we hit the summit ridge we pulled the rope off, dropped the packs and skimo style raced over to the true summit.  Both of us were surprised at how good we felt.  We hit the summit in 3:54.  Two years ago when I was there it was hard to walk more than 10 steps without blowing up.

From there we ripped skins in less than a minute, snapped a mandatory summit shot and were off.  Dropping off the east side of the summit crater there was nothing but rock hard ice feathers all over. This is not easy skiing.  Luckily that only lasted for a few hundred feet and then we were in sun soften snow.  Before I knew it the DC was right in front of me.  This was the best skiing of the year.  Roughly 40 degrees, soft corn, no wind, bright sun in an amazing location is hard to beat.  We were able to stay on snow and ski the entire Cleaver in one shot.  What a treat.


The Cowitz and Muir were uneventful slush fields that we mostly straight lined.  This was some of the ugliest skiing to grace Rainier's flanks - race skis and slush is a little challenging.  We watched to time click over 4:40 (running record) at 7300'.  We figured fishing in the next 20 minutes would be a breeze and we put down a respectable ski time.  That's when the soupy clouds came in.

The climbers coming up began to apear right in front of us.  The wands became hard to follow.  One mile and 900' from the trailhead we were at 4:48.  This is where we made a wrong turn and headed west toward what we later learned was the Nisqually River.  We searched around for a few minutes once the watch read 5,500' and we realized we were not in Paradise.  Andy skied a gully that cliffed, I skies through a few bushes that cliffed.  From there we hiked up 150' feet and realized we were way off course.  A nice steep chute through the cliff band was too tempting to pass up so we took it and skied down to 5000' where the snow ended and stopped the watch.  5 hours 0 minutes 57 seconds.   Paradise to summit to snow-line.  Although not ideal, I think this a a fair time for a speed ski standard.  If we didn't take a wrong turn I'm guessing we would have been in Paradise in roughly 4:53.  Our last 2 mile splits were 4 minutes/mile and the terrain we had left was the same.  Oh well, next time...

Thoughts
5:00.57 is not fast.  We brought a lot of extra safety gear due to our fear of the weather forecast.  Conditions were also slow.  2 years ago we had firm snow to Muir, powder to the summit and back to Muir, then fast corn back to the car.  This year it was slush to Muir, ice to the summit, corn for a few thousand feet followed by sloppy/sticky snow from Muir on.  Low snow levels this year also added time.  8-12 ski transitions on the way up and another 6 or so on the way down could be avoided easily earlier in the year.  Given ideal conditions and a little knowledge of the route conditions and this will go in 4:20, maybe faster.  I think the warm weather and rapidly increasing amount of rock on the route will make me wait for a year but come spring it's game on.  I know a solid handfull of randonee racers who should up to play.  Who's in? 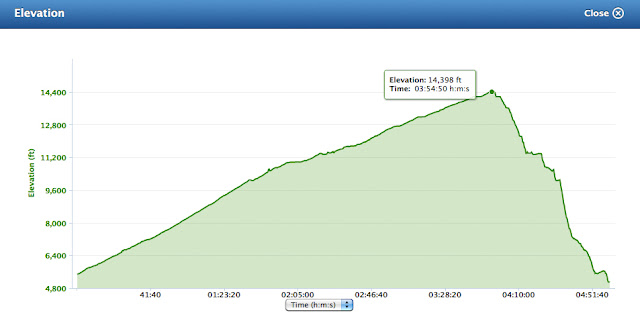 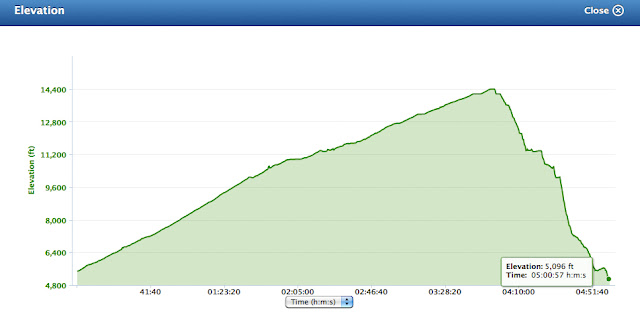