A Ski Descent of the Otter Body

Leaving Salt Lake, the goal wasn't to ski the Otter Body.  We had flirted with the idea for the past couple years and had read everything about it that we could find but we were heading up Jackson for a different project.  Tom Goth was recruited last minute to join in on the all day fun.  We've skied a lot with Tom and although he'd never been to the Tetons and had very limited climbing experience we figured he would make a strong addition to the team.  We thought, he's fit, he can help carry the heavy load and break trail, and that any climbing or rappelling we needed to do would be simple enough to walk him though it.

As we drove up, we were in contact with Zahan Billamoria.  He successfully guided a group up and down the Grand that same day and offered a few reassuring thoughts on snow stability.  He was also kind enough to offer us a garage to pack gear and a room to sleep in before our ridiculous 12 AM wake up.  Right when we pulled in, he opened his computer and showed us what he and his clients were up to earlier in the day.  It looked magical.  They skied from the summit of the Grand in powder.

Apart from giving us snow stability beta, Z was also able to give us a little insight on the Otter Body. He had skied it earlier this year with Brian Harder and also helped guide the TGR crew down it.  He pulled up a few photos, told us about anchor locations, and gave a few words of encouragement.  I was sold on the idea, but wanted to stick with our plans and thought the Otter Body would take too long and compromise the rest of the day.  Besides, as I laid down to sleep all I could picture was me getting flushed off it.

You would think waking up at midnight the day after working a 30 hour shift would be hard.  It wasn't.  We all jumped up and were off to the Bradley Taggart trailhead.  Skinning from the car was easier than expected and before we knew it we were at the meadows under calm skies and a full moon.  If travel stayed that easy we were going to summit with multiple hours of darkness left and be on perfect pace for our link up goals.  Just when we started talking about how easy the morning had been, conditions began to change.  The majority of the Teepee Glacier was covered in slough/debris from the day before which made for difficult travel.  We slowly fought our way up transitioning from skinning to booting and back a handful of times until we popped out at the Teepee Col.
The moon was massive, lighting up all of the surrounding peaks. We all felt pretty lucky to be in such an amazing place and have this kind of weather.  20 minutes later those happy/lucky feelings were replaced with cold induced nausea as we were getting absolutely hammered with wind at Glencoe Col.   All we could do was shield our faces from the swirling snow, worry about the forming wind slabs, and press on.  We took turns wallowing up the Stettner and eventually made our way to the base (over shot it at first and had to down-climb back to it) of the Chevy ice bulges.

It was still pretty dark and Andy happened to have two headlamps, one of which was 700 lumens, so he won the lead.  We climbed the Chevy roped and were pleasantly surprised at how filled in it was.  The ice bulges were similar to two year ago and only 5 or so feet tall.  Tom dominated the ice even though it was his first time swinging a tool. With all the wallowing, the wrong turn, and messing with ropes, we managed to waste hours getting from Glencoe to the Ford.  My hope of a moonlight descent was now gone.
From there, the Ford was straight forward and as we pulled onto the East Snowfield the wind died completely.  It seemed like the East side of the mountain got through the morning without getting too hammered and we could still see the four sets of tracks laid down by Z and his party the day before. It almost looked like a tracked Snowbird. 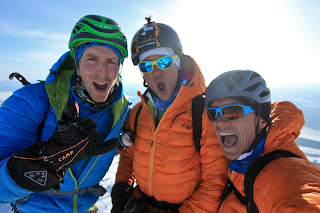 Tom had never summited the Grand before and I think he was sincerely blown away.  And with good reason; it was still, the lighting was amazing and we were about to ski!  We took a quick photo and started back down with the plan to regroup at the top of the Ford.  We skied the moguls and then had a discussion about what to ski.  My main fear with the Otter Body was that a fresh wind slab that would rip and graphically send us over the massive cliffs between us and the Teepee.
It was already 8 AM (too late for our other plans), the snow was relatively unaffected by the morning winds, and it was still cold.  We figured we might as well give it a go.  Besides, we had enough gear to rap anything we were uncomfortable with. Now all we had to do was start making the most exposed turns of our lives.  I cautiously led out over the rollover and into the funnel that drops you onto the Otter Body.  This was beautiful.  Like they say, we were skiing on the moon.
We regrouped again below a little rock outcropping and the Andy to the lead. He made more cautious turns down increasingly icy snow to the rap station above the Otter Body proper.  Here the sun felt like it was starting to warm everything up and we all felt a little urgency.  Z's anchor beta was spot on and Andy quickly found the purple sling on the left hand side.  He rigged the rope and was off.  When I joined Tom we quickly ran through everything and he made the first rap of his life!

Once down on the Otter Body Andy and I pulled and coiled ropes while Tom led off to the tail.  As he approached the shade line he made increasingly cautious and sketchy turns until he stopped and waited for us in the shade.  Andy and I both felt our edges grip less and less as we came up to Tom.  We all thought about continuing a little further but we knew the icy crust was only a few inches thick and self arrest with whippets likely to fail.  Our sense of self preservation had us pulling skis off and down climbing the the tail.
Once on the tail we looked for the anchor Z told us about on the skier left side but all the new snow had plastered everything.  The booting still felt fairly secure so we just down booted looking for the next rap station or a easy place to build one.  If all else failed, we had a ton of crap we could have burried and rapped off of.
Conveniently, the the last two rap station were right where we hoped they would be so no major gear sacrifices had to be made.  We worked as quickly as possible with the constant thought of the East Face falling down on us and were able to get down to the Teepee without incident.  A nasty looking black bird sat and watched us over the final rap adding a but to the erie feeling the Chimney already has.  I must have looked at that damn bird a dozen times while waiting to rap.
Once we were all down Andy let out a shout of joy and we were off skiing the worst kind of breakable snow down the Teepee.  No one cared though, we were just thrilled to be mostly out of harms way and headed home.  There were brief thoughts of pushing on but the rapid heating and the fatigue we all felt kept us in check.

Once back at the car we all commented on how we'd had enough excitement for the time being.  Thoughts of mellow running adventures, eating, and just hanging out seemed more appealing that anything else.  I think I swore I wasn't going to ski on my next day off.  Three days later and my thoughts have already drifted back to the Tetons.  I guess it's not quite time to start running yet...


Also, one of the best trip reports I've ever read is about the Otter Body.  Christian Beckwith wrote about his descent here.
Posted by Jason at 12:41 PM