We've been talking about traversing the La Sal mountain range for the past few years.  Last spring Andy, Tom, and Teague even attempted but came up a few peaks short due to bad weather and work obligations.  This year we've been keeping an eye on snow hoping that our limited time off would align with favorable conditions.  This Friday the Moab avy report said, "The La Sals picked up 4" of medium density snow on Wednesday night. It fell with virtually no wind, and it is truly amazing what a few inches can do to freshen up things."  We were psyched!

Only problem was that Andy and I had committed to race for Outdoor Research in the Gore Tex/Elk Mountain Grand Traverse. We had been planning on racing and since the Grand Traverse is such an inspiring course (Crested Butte to Aspen) we were happy to forego favorable conditions to head to CB and give it a go.  We drove down with Tom Goth (last year's Grand Traverse winner) and Lars Kjerengtroen (NCAA track and field All American) who were favorites for the win and also looking forward to racing over to Aspen.  After a night in Grand Junction and 7 hours in the car strategizing with two of the fastest guys in the country we were ready.  We still joked about making our own Grand Traverse in the La Sals but our focus had shifted to the race.


And then they announced we would not be going to Aspen.  Instead we'd be touring around in low angle trees right outside of Crested Butte.  Still a long, epic race but certainly not as inspiring as the original course.  Immediately Lars and Tom said we should go to the La Sals.  Andy and I both agreed but still felt a commitment to race.  The Outdoor Research motto is "Designed By Adventure" and with this in mind we spoke with Christian Folk (Athlete Manager for OR).  We felt foolish talking about backing out of racing but wanted to hear what his thoughts were now that the course had changed.  Without hesitation he basically told us we should do what inspires us and that we should go.  He also said he was from sea level, hadn't been training, and was sure the race would be a sufferfest but would race in our spot.  On the OR website they state, "Our tribe is devoted to exploring our outdoor passions and challenging ourselves in the mountains."  Christian was up for a challenge and was psyched for us to leave the OR sponsored Grand Traverse to go challenge ourselves with something we were passionate about.  Pretty cool.

Once Teague Holmes and Brad LaRochelle heard about the change in the race plans they were also keen to give the La Sals a go.  With the focus for the weekend returned to the La Sals we all left Crested Butte and headed to Moab.  Along the way we called Scott Simmons told him our plans and asked what we was doing over the weekend.  His response was, "I guess I'm going to the La Sals." Now we were a group of seven.  A few hours after arriving in Moab we were all crammed in a little truck heading up a bumpy road to the base of South Mountain

The La Sals run north to south and are divided up into three groups, the North, the Middle, and the South groups.  We figured the best skiing would be on the north faces so we decided to start at the south end and head north to Castle Valley.

The South Group
The only significant peak in the South group is South Mountain (11,817).  At 4 AM we took off from the trailhead at a pretty quick pace and headed toward South Mountain in the dark.  We walked for maybe a mile and then found firm fast skinning - a perfect start to the day.  With the fast conditions we were able to summit pretty quickly and skied off to the east and then north towards Mt. Peale.  The avy report was correct.  4" was truly amazing.

The Middle Group
After a great descent spirits were high heading up Peale.  We stayed on firm snow the majority of the way which made for easy travel but once we hit the summit ridge we were just blasted with wind.  Everyone bundled up and still froze skiing the west ridge on the way over to Tuk.
From the summit of Tuk we reversed our up track until Teague promised good skiing off to the north.  We reluctantly followed but found some of the best snow of the day.  I'm pretty sure Teague was just guessing but it worked well.   Laurel and Mellenthin went smoothly and before we knew it the South and Middle groups were done.
The Northern Group

After Mellenthin the only major climb left was Mt. Tomasaki.  We skinned/booted/fumbled through scree to the summit where we all were feeling the day's effort. Luckily the remainder of the peaks have relatively small prominence above the ridge and we were hopeful they would pass quickly.

After Tomasaki we were forced to walk portions of the southern aspects as we headed to Castle Valley.  It seemed improbable but every descent held enough snow to allow for continuous skiing.  We kept swapping leads and, although each climb became progressively less comfortable, they were pretty short and we were all able to keep moving together. 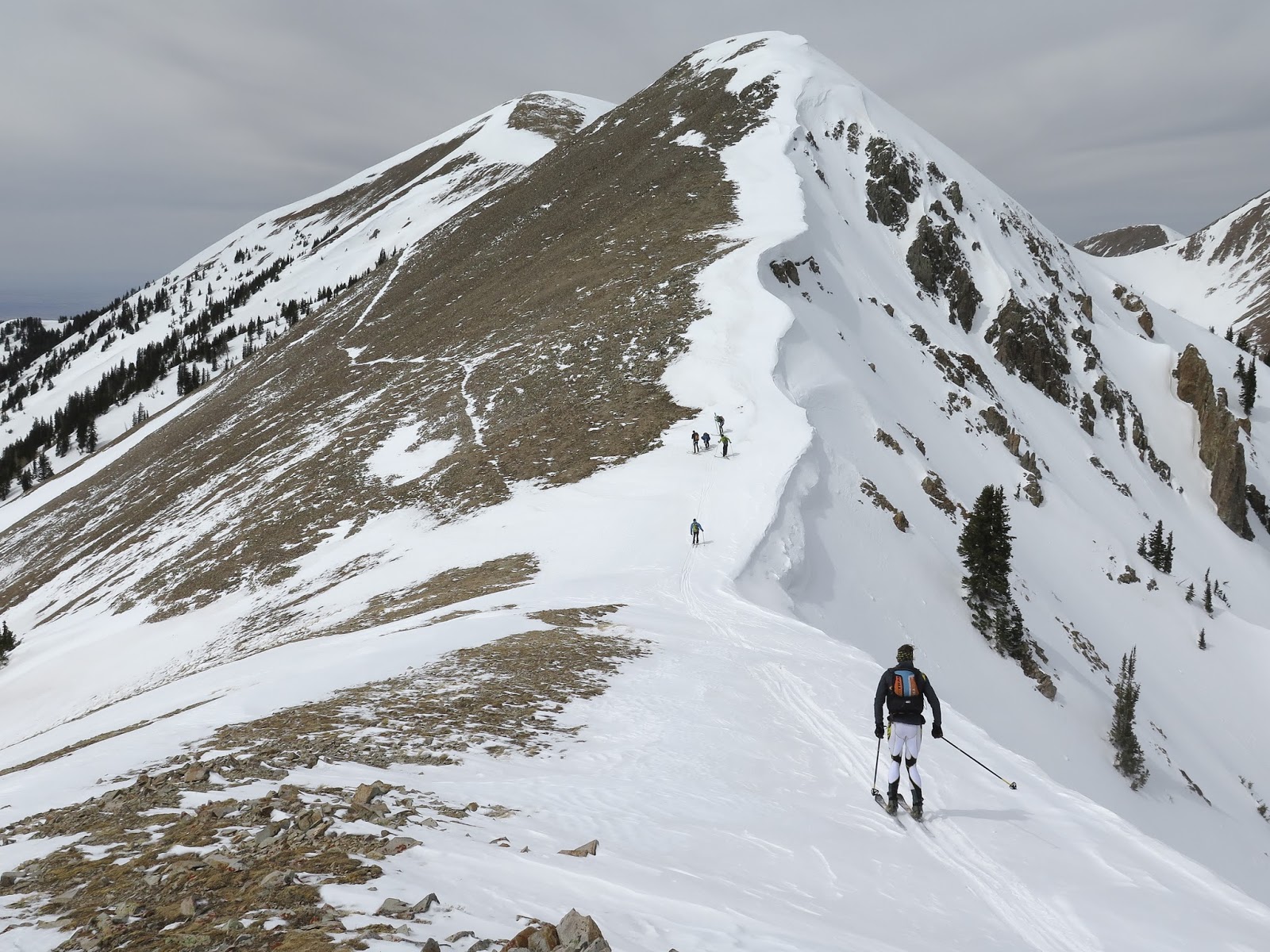 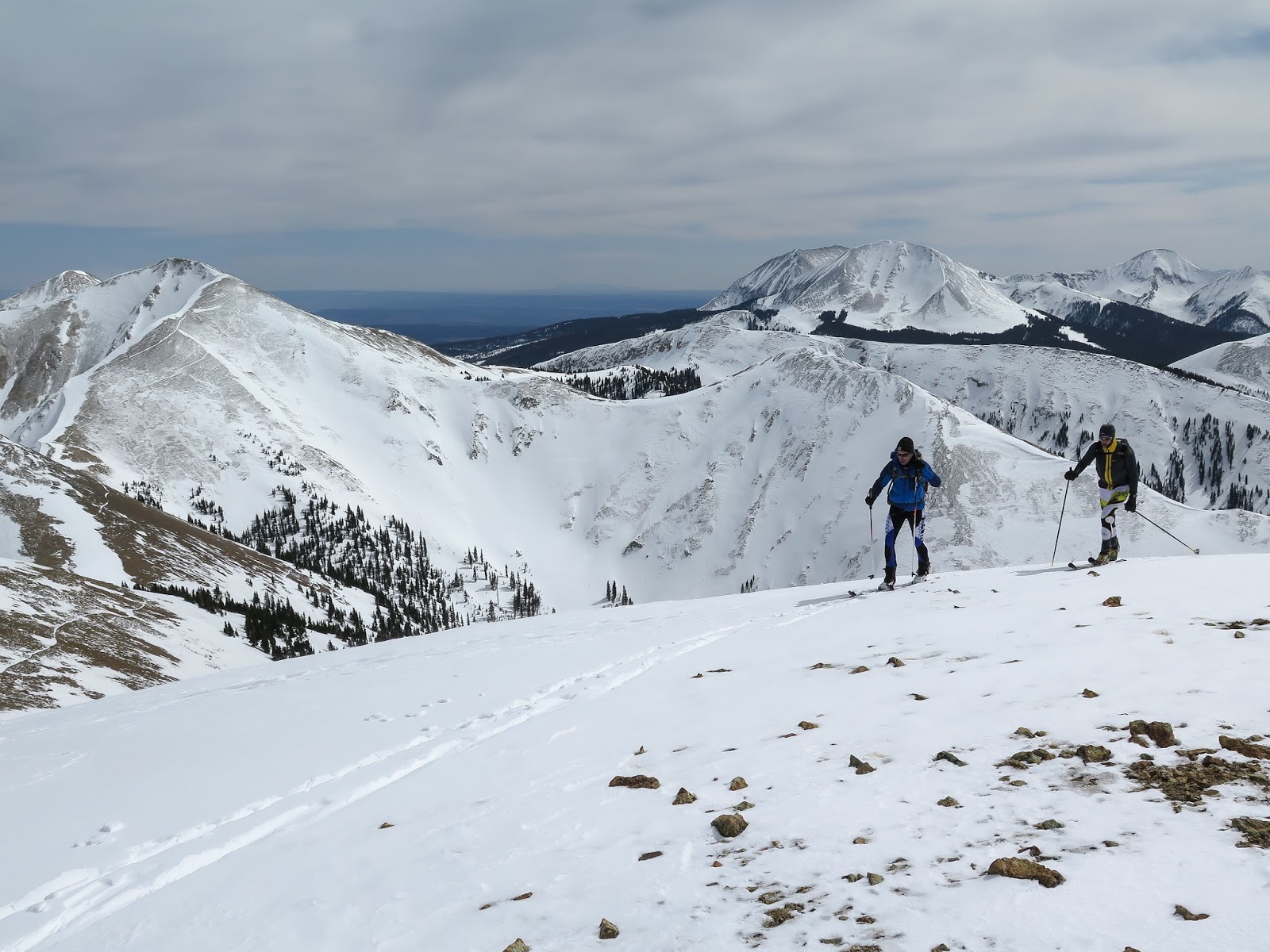 Once we skied off the north end of La Sal Peak we found ourselves in gully hell.  Isothermic snow and down tree made travel painfully slow.  From the last summit we had seen the road where Tom's girlfriend Dom was waiting to pick us up.  We knew the general direction of where we needed to go so we just kept picking our way through the mess.   We were thrilled when we finally saw a house and an adjacent dirt road that would lead us to freedom and dinner.

Thoughts
We couldn't have asked for better conditions.  The skiing was actually quite good even though there was limited snow.  Although it was warm the winds kept southern aspect cool and wet slide danger at bay.  It's seems improbable that in a group of seven people everyone would be feeling good enough all day to not hold the others up.  Somehow it happened.

Christian finished the Grand Traverse in respectable time and via text said, "... a burnt face, limping due to muscle fatigue, blisters - probably going to be a few days before I do anything!" I feel the same and love it!