I woke up at 3:48 am to make it to the Golden park n' ride by 4:30 to meet Alex and Jeff. Unfortunately, I underestimated how long it would take and I arrived 20 minutes late. I felt bad about being late since it sucks when people are late, but especially when it is the "middle of the night". The morning wasn't off to a good start since not only was I late but it was raining and foggy too.

We tried to stay optimistic about the conditions and Jeff was cool about driving his newer Tahoe as far as he could until the road become horrible and he almost crashed into an old tree trunk. So we decided to park on the side of the road and start our skinning from there at about 6:30 am which ended up being only about 1 mile from the actual trailhead. 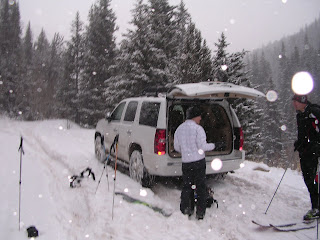 Here we are hoping for the best and for the weather to give us a break
The weather did seem to slightly improve for us on the approach: 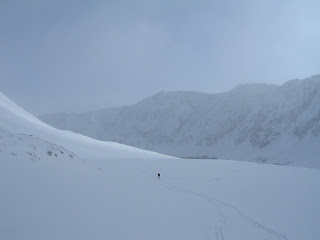 Jeff on the approach. 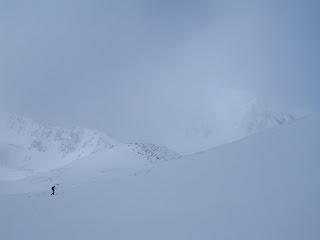 Alex on the approach.
It took us about 2 1/2 hours to reach the base of Torrey's. Since the clouds covered almost everything but about the bottom 1/3  of Torrey's we had a hard time knowing which couloir was "Dead Dog", but we figured we could find it from the top once we reached the summit. So we started booting up what looked like the main couloir from the bottom. 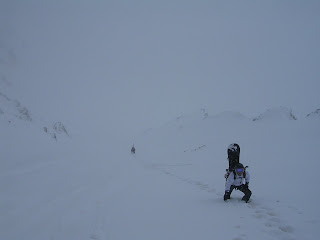 As we started booting it almost immediately became "very suspect" there was evidence of severe wind loading and lots of evidence of previous slides on certain parts of the couloir with other parts/sections that seemed to be a "ticking time bomb". Anyway, realizing this was pretty disappointing because it became clear that we should turn around and "Dead Dog" would have to wait another X amount of weeks/months. Looking for a safer/better place for us to transition, there was a a rock outcropping about 200 feet ahead so I decided to go to that point and wait for Alex and Jeff.   As I was booting up towards it with my head down I heard a loud howl and rumble. As I looked up, the large rock band of the upper ridge directly above us was about 1/3 covered in a sea of snow. I immediately dropped my poles to get ready to swim and thought "@#$% this is it". At first sight it looked and sounded like something from way above had broken off and caused an avalanche to charge towards us. This thought lasted about 5 seconds and I realized it was just a combination of an enormous amount of snow blown off the top with a few loose rocks blown over the ridge. This pushed a bunch of sluff down the couloir, which was split by the rock outcropping in front of me and quickly dissipated. Once Alex reached the rock outcropping I told her what I saw and as I did a smaller version of the same thing re-occured and we both agreed we needed to "get the hell out of here". 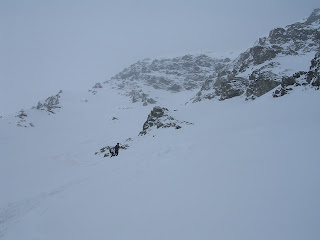 Here is the Alex and Jeff on the descent. The rock out cropping we stopped at is not the one they are standing under, but the one above them about 200 feet with the rock band/ridge directly above. 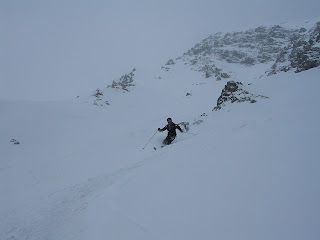 Jeff on the descent.
Anyway, we made it back down to the car about 6 hours after we started. If nothing else it proved a good "recon" tour and taught me a good lesson, in that, if I want to ski big lines before mid May (with a few "exception days") I should do it in Utah.
Posted by Jason at 2:47 PM