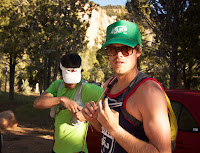 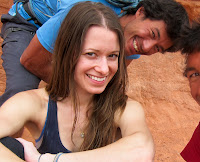 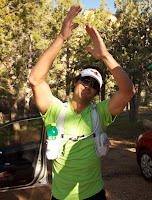 We had big plans for a couple different ski link-ups this weekend but the weather/conditions weren't looking too favorable. Not sure why giving the Trans Zion a go sounded appealing but it did.  After talking with a dozen different people Amanda and Warren were the only ones cool enough to drop plans and head to southern Utah.  Warren gets extra respect for driving through the night to arrive at our campsite only 30 mins before we woke him up to start shuttling cars.  A 48 mile day with 10,000 feet of vertical gain off of 30 mins of sleep isn't too shabby, I don't think we heard one complaint about it either.  Here's a video Andy made:

Untitled from andy dorais on Vimeo.

The East Rim part of the trail was pretty spectacular.

Once we hit the Grotto we filled up with water, chatted a bit and then headed towards the Angel's Landing shoulder.  The long up turned into a hike as opposed to a run.  We figured it was better to be a bit conservative at the beginning seeing as this would be 22 miles farther than Warren and my longest run ever and 17 miles longer than Andy's.  Also, all of us had run less than 10 times since January with only one of those being longer than 10 miles. I figured at least one if not all of us would be blowing up at some point during the run.  Surprisingly everyone kept it together.
I think we all agreed that the West Rim was probably the most scenic portion of the run.  As we randomly came across trail signs we somehow miscalculated our distance and figured we had run 6 miles less than what we actually had.  This was a little (a lot) disheartening...
Once we got off the West Rim our we realized we were 31 miles in instead of 25, nice.  That helped the group's moral (at least mine) quite a bit.  From there on out the trail was less muddy so we could run more consistently, also nice.

While on the Connector (20 miles from the end) Warren ran out of water and Andy and I were both lower than we would have liked.  Lucky for us, a few hikers told us they just stashed a gallon that they didn't want at the next trailhead. Another moral booster.  After the water we felt pretty good and rallied through Hop Valley, crossed a few rivers, started feeling crappy again, and finished with a 15 min hard effort to reach Lee's Pass in just under 12 hours.  Pretty fun to feel beat up every once in a while.

The next day we got to do a little sport climbing at Chuckwala Wall in St George.  Climbing, sitting in the shade, drinking Diet Mountain Dew and chatting was pretty relaxing.  Andy was grumpy though, the following picture proves it.

Talking about the run after the fact, Andy figured he didn't eat enough and was wishing he had packed a few more gels.  As we unpacked he found a little surprise in his fancy Nathan pack, HA!

This is what I ate.