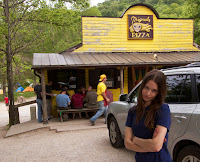 I had a good/great weekend in the RRG (last one as a local) even though the weather was pretty bad.  We had quite the international crew, Amanda came in from Utah, Thierry from France, Nuria from Spain, Fromke from Lexington and Topher, Nicole, April and Chris from Indy, nice!  I'm actually going to miss these guys (plus a few others) and climbing in the Red, weird. To make things even better, we had access to a cabin all weekend so we didn't have to camp in the rain.  April and Chris found a new dry area called Shawnee Shelter which was good since it was POURING.

Next up, Great Arch area.  We must have met the ONLY cool people from Colorado, that was a surprise.

The next day we decided to see if the Kia could make it down into a muddy Southern Region and get us to Shady Grove.  Luckily the Koreans make a pretty sweet car.  Chris was the MVP of the day for on-sighting Far From God (12b).  Topher was close to getting the on-sight too, I don't think he milked the lower rest enough... We found another amazing line that I'm sad I won't be able to get back on.  I guess Taste the Rainbow will have to wait.