The 2 day North American Championships added the "mountaineering" part of the equation back into Skimo.  There may be a few bugs to work out but the course was amazing.

Day one consisted of a 2 lap sprint course.  The first lap was an uninterrupted skin track and the second was a skinner with a boot pack in the middle.  At about 200 feet per lap this race was over quick.  Everyone was seeded, the fastest seed started first with the next fastest starting in 30 second intervals. 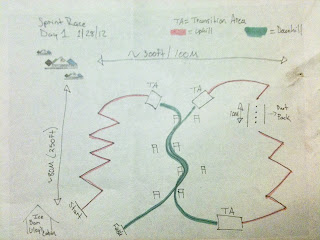 I started right in front of Andy and had a good first up.  The next 2 transitions were a fumbling mess which cost me some time and had Andy right on my heels.  I started the next lap moving well only to find one of my skis falling off and Andy gapping me.  Turns out the lock mechanism on my toe piece broke during warm up and I tried to "fix" it with duct tape before the race.  I guess my fix didn't work.

After I grabbed my ski and put it back on I was able to catch back up before the transition to the boot pack.  Once again junkshow Dorais showed up and I fumbled with my pack trying to put my skis on, Andy got on the booter quickly and was gone for the rest of the race.  On top of the boot pack there was an short 50 meter skin to the last transition.  Right after putting my skis on one of them fell back off costing me more time. At this point Reiner, who started 90 secs behind me, was catching up.  Knowing my race was pretty bad, I transitioned fairly well and finished with frozen hands (the car read -18 driving in) in 20th place.

Day two was the traditional race.  From the get go the Italians were out in front and it stayed that way to the end.  Pretty impressive.  The first climb started with low angle skinning up to multiple switch backs leading to Guide's Ridge.  The technical switch backs caused a small traffic jam.  Going hard enough to get in front of the traffic turned out to be a good move.  Being able to move through the switch backs quickly allowed me to gain the ridge in good position, right behind Luke.  We pretty much climbed to entire ridge unimpeded.  Apparently there was another traffic jam behind us on the ridge.  Two traffic jams avoided!  After summiting, Luke put in a great move coming off the peak.  By the time I got off the fixed line he had already run down a few hundred feet, put his skis on, and was skinning away from me.

I was hoping to bridge the gap but over the next two 1000' foot laps I couldn't really get going.  I think trying to race above 10,000' made everyone feel a little sluggish and positions stayed the same from there on.  I was especially lucky to hold my position after getting lost and finding myself on the wrong side of the mountain.  Since the Italians aren't North American they let us little people stand on the podium.