Last Thursday Jared and I were all geared up and ready for some steeper ski mountaineering but the new snow had us head toward more "conservative" terrain.  We figured we'd ski the N face of Superior and then either hit Monte Cristo or the S Face of Superior and Suicide Chute.  On the way up we noted 2 small, several inch deep, drifts that broke out on wind loaded northernly aspects.  After getting up Superior we ski cut the N side with no results, we figured any of movement we got would be manageable.

I skied first, pulled into a safe zone and watched Jared ski by in deep new snow until he yelled "Avalanche!" I watched for a second until he skied out of it.  Looking at the crown it was only 3-5 inches deep.  We laughed. 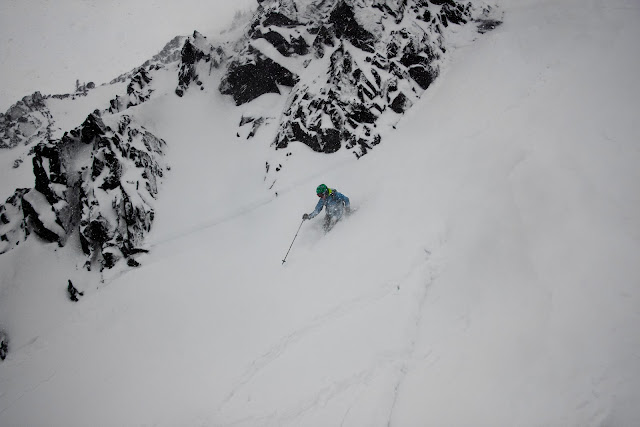 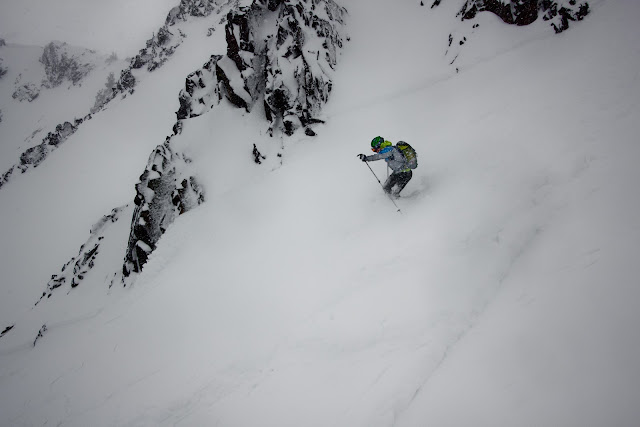 After this little run in, we figured N faces weren't the safest option we figured we better take S Superior out and be done for the day.  Everything we had seen move was on the northern aspects, the new snow had bonded fairly well on S faces, and once again, we figured if anything moved it would be manageable.

I skied first, cut the slope, was happy with the results and went a few hundred feet pulling off in the left side of the far left chute high on Superior.  It's looked like the snowpack got a little boney towards the end of the chute so as Jared skied by I yelled to be little cautious.  Next thing I know he's going cartwheeling over the exposed rock at the end of the chute.  I quickly turned my beacon on and asked myself if it was safe follow.  It was so off I went.  I remember looking at the crown (don't remember how deep) as I skied by, noting that I was skiing on the bed surface and then coming to the rollover where the snow ran out and I was left staring at exposed rocks.  I remember them being big, sharp and all pointing up.  I looked at my beacon and it wasn't picking anything up, for a second I thought Jared's beacon wasn't working.  That's when I started yelling, luckily I heard a response.  I saw Jared down another 100 feet and a little off to the right.  After side stepping through the steep rocks I stepped onto snow again.  Immediately another slab broke loose.  I yelled franticly for Jared to get out of the way until it was clear the slab got funneled away from him.  Jared told me after the fact that he saw the 2nd slide coming but couldn't  do a thing about it.

When I first got to him, I gave him a quick once over.  He could talk, he was breathing although it was a little fast, he had a good pulse.  He told me he thought he broke some ribs and maybe his right femur.  I looked at his leg and saw blood dripping from the seat of his pants.  Having just got done working with the trauma team at the hospital for the past month I couldn't help but think the worst.  After discussing our options for a second Jared thought he'd be able to work his way down since his leg was starting to feel a little better.  With the fear of a femur fracture still in my mid, I offered to rig a splint up.  A shovel handle padded with a coat applied with a skin around the thigh and one below the knee.  He thought it was helping so I watched as he began to slowly move.  We were 2000' above the road and it was going to take a little while to get all the way down.

Thinking there was still a possibility that Jared's condition would deteriorate, I decided to call Alta Patrol and see if they could send someone to meet us at the bottom.  Only problem was I didn't have their number.  After calling a few friends to ask for the number and getting nothing but voice mails I decided on 911.  They asked if I thought we needed a helicopter.  I said no but help at the bottom would be appreciated. They were kind enough to mobilize an ambulance and talk with ski patrol and let them know what happened.

As Jared kept working his way down he started telling me he thought his leg was just a muscular injury.  After sliding on his side for a while he decided to stand and give skiing on the good leg a go, he just dragged the bad leg.  This seemed to work well and we were able to keep heading down to the mini crowd of EMS personel that waited.  We thanked them for being ready but declined transport now that Jared had been able tolerate a little weight on his leg. 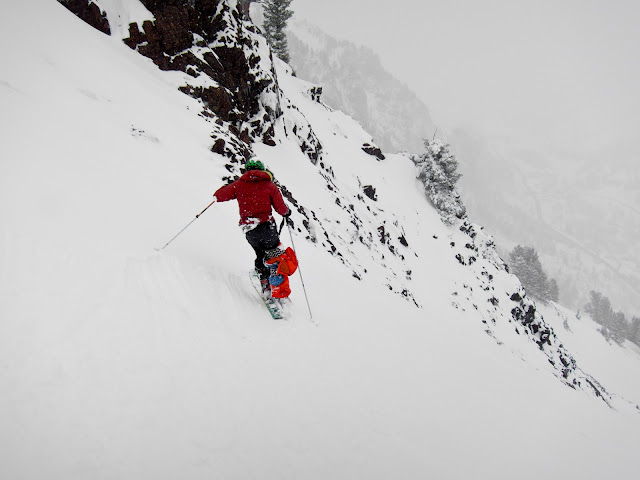 After getting to the hospital he was rushed in, stripped naked and found to a have a few lacerations (head, leg, butt) one needing stitches, a muscle that avulsed from his femur, cracked ribs,  and a partially torn hamstring.  Nothing that won't fix itself.  It might take a month or three but he should be good as new in a bit.

Reviewing his gear showed a hole in his helmet and a cracked beacon.  Things could have been worse... 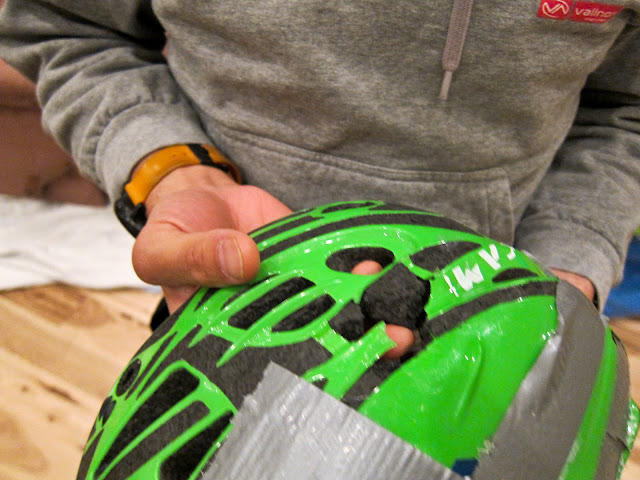 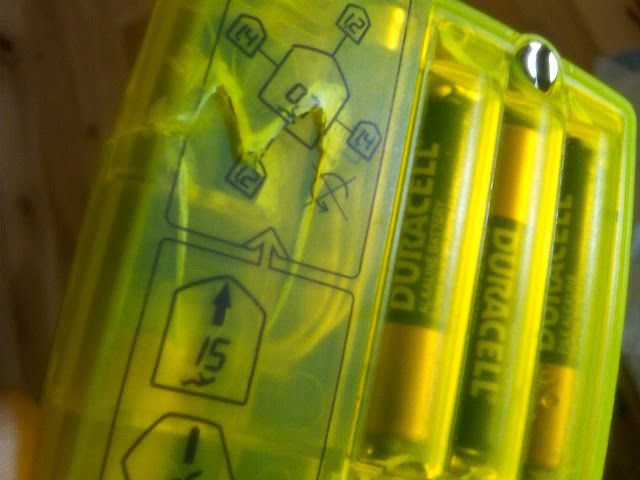 Thoughts:
1. We're lucky
2. It's easy to talk yourself (at least me) into thinking that nothing bad will happen.  We've skied all sorts of stuff (maybe we shouldn't have) in moderate danger thinking ski cuts, cornice drops and what not will keep us safe.  Maybe a little more respect is needed.
3. Transporting and injured partner is not easy.  Luckily Jared was able to get himself out almost completely on his own.  It still took a while but if he were unconscious it would have taken forever.
4.  "Manageable" sluff or slides are manageable in some situations, not all.
5.  No body wants to die skiing, not worth it.
6.  Although we were scared to ski for a few days, I can feel myself wanting to get back out and start pushing it again.  It's going to take a little effort to remember the lessons from that day.
7. Wear a helmet!
8.  Be careful!

Also, Jared lost a High 5 with an RT binding and a ski pole.  If these are found I'm sure he'd love to have them back!
Posted by Jason at 11:38 AM