Timp, East Ridge -There is still snow to ski!

The avy report from this morning said this is the worst snow year in over 60 years.  Looking around Utah County I believe it.  It also said, "Yesterday it seemed like winter had been cancelled due to lack of interest."  SHAME.  There's stil plenty to be had, maybe not winter skiing but the spring season is here!
Andy, Swain, and I headed to Mt. Timpanogos yesterday in search of a little corn on the higher aspects.  Andy and I  both had to work until 3:30 the night before so the 6AM wake up felt awful.  2 1/2 hours of sleep for this season's snow seems like bad idea but just isn't.  We picked up Swain and were a little slow getting to Aspen Grove.   A 7:45 start had us all concerned we'd be bailing before we got anywhere due to heat.
Topping the headwall and heading towards the snowfield we figured the snow would be turning to slop. Luckily, high clouds and a little breeze kept the warming in check.  The plan was to either ski Primrose once the snow got sloppy or head over and ski the west face (less sun exposed in the morning) off of the South Summit.  Since conditions stayed good longer than expected,  we figured we better go at least check out the East Ridge.  We thought is might be perfect corn.
A quick traverse from the S. Summit led to an unexpected rock hard East Ridge.  At least it wasn't going to wet slide on us.  There are a series of cliff bands to navigate which look inconsequential until you were right above them, definitely big. Hundred feet?  We spent a fair amount of time traversing back and forth above them until we could find sneak passages.  This was first time this season that skiing produced, what felt like, a little adventure.


As we got lower, the snow finally started to soften and we were treated with corn half pipes and wind lips the whole way out, almost... 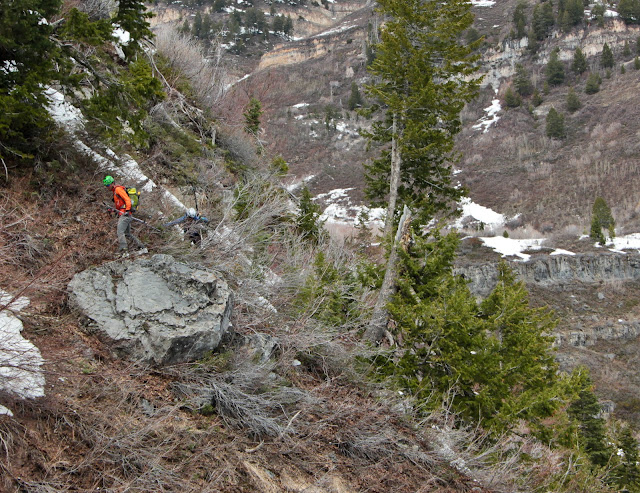 Although the last 400 meter was a walk through bushes we learned that SKI SEASON IS NOT OVER! It feels like it's just beginning now that the Avy danger is starting to settle out.  Who needs winter?  Spring ski's better anyway, right?