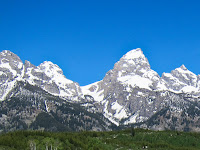 Jared's been talking about this one for a while now.  I was always on board but wasn't super psyched until Brian, Sam, Jared and I climbed the Grand en route to the Trifecta a few weeks ago.  That day Jared had to be in Salt Lake early so he skied out after summiting the Grand.  His car to car time was 7:21. Pretty quick but to me, it seemed like we wasted at least an hour taking pictures, getting lost,  slowly transitioning, hiking at a casual pace, sitting on the summit...  Since then I've thought A LOT about how to get up there and give it a go.  Andy and I were planning on trying later this week when we got a picture text from Nate Brown with his watch reading 7:15 and the caption of GFT!  His psych is pretty contagious.

Somehow Jared, Andy, and I were all free on Tuesday so off we went.  The first two people we talked to in Jackson added fuel to the fire.  #1, the cop who pulled Jared over for speeding.  After lawyering his way out of ticket Jared was asked what our plans were.  He said to attempt a speed ascent of the Grand.  The cop laughed, said yeah right, and walked away.  #2, some guide we met at the trailhead.  The first thing he said in a condescending tone was, "you're too late."  The next thing was, "two tools, two whippets?  That's 4 tools! What?!"  The next I heard as (not even close to a direct quote), "nice tights, you guys are idiots, I'm a guide, I know a lot."  With that fresh in our minds we started jogging the flats and fast hiking any ups on the way to the meadows.  We planned on dividing the day into 3 parts; 1:20 to the meadows, 1:20 to Glencoe, 1:20 to the summit.

1:16 at the meadows had us skinning on variable snow up to Glencoe.  After swapping leads about half way up the Tepee, we decided to start taking the booting the 5 people who left before us had kindly put in, thanks! We decided not to take it lower down since we normally prefer to skin but the warm temps and the morning sun had done some damage to the Tepee.

We arrived at Glencoe at 2:38, transitioned and left for the summit at 2:45.  Hard snow made for fast travel, no need to put a booter in, we just front pointed all the way to the summit (3:27).  On the summit we regrouped for a few minutes, laughed a lot while yelling at Andy, and were off.

The skiing down through the Ford was pretty great, hard pack but very skiable.  After transitioning right at the base of the Petzoldt ridge we down climbed through the ice which seemed easier than a few weeks ago since the ice was pretty beat out.  Moving quick yet cautiously on exposed terrain with a few friends is pretty amazing.

All we had left was sloppy corn down to our shoes and a quick run to the car.  I don't care what Andy or Jared say, the run out was great.  A few falls and not cutting any switchbacks (erosion=bad) cost us a bit of time but we didn't care.  I couldn't help but laugh/smile the whole way.