Getting to Split Mountain was not very quick.  After a long straight drive through Nevada we had to drive about 20 miles on a dirt road to get to the Red Lake TH.  This road sucked.  Luckily Andy had a good sense of direction and an iphone.  All I had was a shovel.  We filled in the huge ruts and made it to the trailhead in the dark.  See Andy for more.
5:00 start had us leaving at the same time as another party of two.  Chris and John were heading for the same spot and they knew a short cut; we all stayed together for the day.   Crazy morning light on the way up. 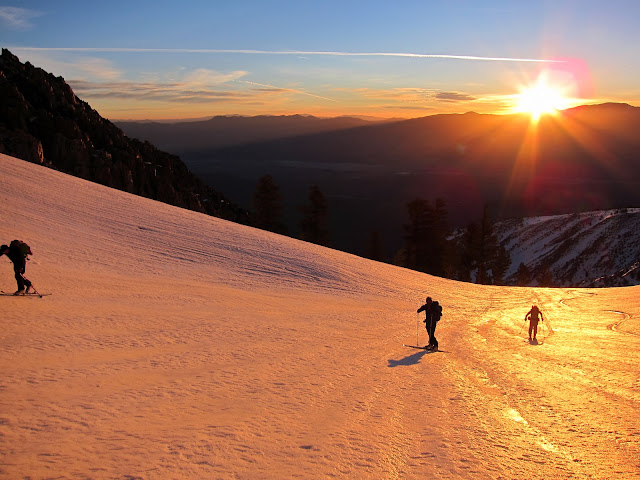 A couple hours of easy skinning put us at the base of the East Couloir.
Luckily, the ice was super plastic and easy to climb.  Apparently the East is hard to find in good conditions.  I guess we were lucky.

From there it was about 2000 feet to the North summit.  All pretty easy booting with optional ice bulges along the way.  Chris and John worked on an anchor as Andy and I headed up.

Sunny still weather on top.  That seems to be pretty common in the Sierra.  We all met up on the summit, ate some food, got psyched for a little skiing.

The skiing in the chute proper was mediocre, variable.  Cool spot though.

Just before the steep ice bulge there was roughly 200 feet of lower angle ice cover with a little bit of snow. We decided skiing it above a ice/rock cliff might not be the safest option.
A quick rap and we were skiing Sierra corn almost all the way to the car. 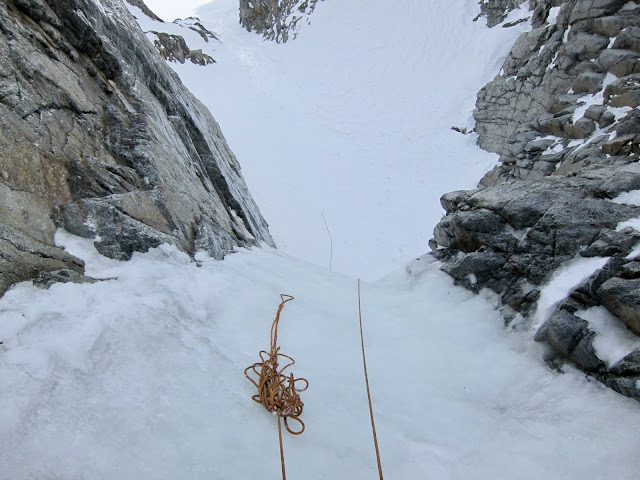 Great start to our trip!